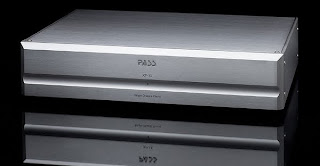 One would easily be lost in the naming of the last series of Pass Labs preamps : XP10 and XP20 for line preamps, XP15 for the up to now unique phono unit, not far from being joined by a new XP25 model - which should be a cost-no-object piece of equipment. This XP15, designed by Wayne Colburn, was introduced as the sequel of famous X-ono, which name was a bit more eloquent. But this is not the main issue, really !


Until now, the XP15 so was a concentrate of the best Pass Labs technologies. Within a single box of luxurious but largely minimal looks (one blue LED on the front panel, full stop) it gathers the power supply and high gain circuits for moving magnet and moving coils cartridges. A very versatile unit indeed, that was referred to as one of the very best preamplifiers in the world by its own makers. Thus, we are going to watch out for the release of its big brother. But it is true that the specifications of the XP15 are nothing short from exceptional. Let’s quote :

- adjustable input resistance between some Ohms and 1 kΩ (for MC cartridges) –1 kΩ and 47 kΩ settings for MM cartridges,

If its front panel is virtually bare, its back side is much less so, since it carries the indispensable connections set (a pair of RCA Input sockets, a pair of RCA and XLR output sockets, an earth ground post, and the IEC socket) and four dipswitches (two per channel) for cartridge gain and impedance adjustment. This is complemented by a useful serigraphy which is a user’s guide settings.

Let’s remind that, if the resistance value for mobile magnet cartridge loading is supposed to be normalized at 47 kΩ, things are far unlike in the wonderland of moving coils transducers. But arguably, these are the choice of analogue aficionados… That is why I choose to use that kind of cartridges during the listening session.

These latter look like tiny current generators – rather than voltage generators – for they show a very small resistive and inductive parts placed in series, the values of which are very different from a model to another.

One usually states that it is advisable to load these generators by a resistor value ranging from 10 to 100 times their own internal resistance, whereas the unavoidable loading capacity – which sums up that of the preamp and that of the connecting cable – has just to be minimised. For this RLC network acts as a bass-band filter, with a resonance frequency set just before the cut, and a rather steep slope.


Much profit can be drawn from an article (and calculation sheet) posted at the address http://www.hagtech.com/loading.html on Hagerman Tech website, which allows to evaluate the optimal impedance loads according to the electrical parameters of the cartridge. That is, those which ensure the flattest frequency response in the audible band and the least marked resonance.

These last years have shown a trend in the reduction of the number of coil windings, which guarantees the extreme lightness of moving assemblies – and so reduces the values of their resistance and inductance. Thus, the characteristics of the models used for this listening session are the following :


One can easily verify that in these conditions, faced with the typical 150 pF to 200 pF load represented by an interconnect cable and the preamp input in itself, the resonance frequency is rejected far in the treble band (some MHz), well above the limits of human audibility (not to mention the mechanical characteristics of the cartridge). The influence of settings on such transducers should then be minimal. Despite, if we still want to minimise the amplitude of the resonance, such a figure as 200 Ω is the best choice. But the influence of these settings on the response of such transducers is theoretically minimal, even if we’d set for the largest input capacity of the XP15 (750 pF). Moreover, the low output level of these cartridges practically dictates the choice for maximal gain (76 dB), which is likely to be a bit unfavourable to the objective and subjective performance of the unit.


After some trials that have proven to be without great impact, listening tests have been carried out with R close to 200 Ω, C at its minimum (100 pF) and maximum gain tag. If this values do not cover the whole set of possibilities, they allow having a good insight on the preamp’s performance, with two models of cartridges that have dissimilar sonic signature…


One more word before listening : the user’s manual is, as usual with Pass labs products, very clear and informative.